Tuning the diameter of the comet's nucleus C/2018 W2 AFRICANO 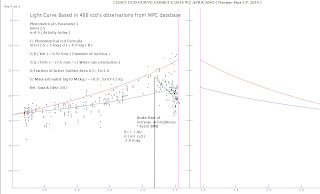 Update of the ccd light curve of comet C / 2018 W2 AFRICAN based on 488 observations of this comet, where I have made the following approximate calculations: 1 Photometric parameters of the comet, calculation of the estimated magnitude estimated at m0 = + 12.5 and the rate of increase in brightness or activity index, n = 4.9, the result indicates an index that shows little or no activity at the core level, behaving as a solid object with almost no gaseous activity. 2 Based on the formula of Sosa and Fdez 2011,: log D (km) = 1.5-0.13H The estimated diameter is 0.9 kms, which is consistent with the data offered for other comets in the same study. 3 Water production rate, based on the estimated absolute magnitude, Q (H2O) ~ 27.6 mol / s, a fairly low figure that matches the tables shown in the same study. 4 Fraction of active area, here we can only establish a scale that turns out to be between 0.5
Publicar un comentario
Leer más
Más entradas